"...an inspired parody of the 1936 anti-drug film Reefer Madness... comparable to such classic gut-busters as Naked Gun and Airplane! The movie is more than just hilarious...
It is a creative effort worth watching and definitely worthy of applause." - Daily Bruin

"The film has a completely new and hilarious soundtrack and storyline...

a cohesive, unified work" -  The Oregonian

"In the best tradition of Monty Python... Reefer Madness 2 is full of fun."

"One sits amazed that the revised dialogue fits so well over the old footage,
that the writers could come up with jokes that worked so well. A clever and hilarious transformation of that classic example of bad cinema... the film is a howl." - Willamette Week

"Totally off-the-wall comedy... The gags come fast and furious...
equally hilarious whether you're under the influence or
temporarily without the necessary doobage." - High Times

"... even funnier than the original -
a wicked send-up on the old characters and situations that is zany and
has a weird comic logic all its own." - Omaha CityWeekly

Now, check out our video clips!

WE'RE NOT PARANOID!  PEOPLE REALLY ARE TALKING ABOUT US. 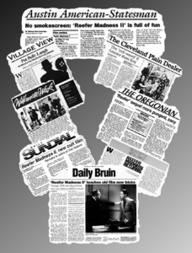